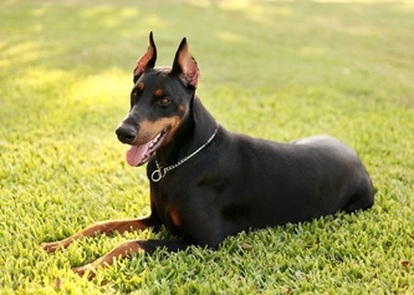 
A Little Bit About Stella Fern...

Stella is black and rust full European Doberman that is 28 inches tall at the withers and currently weighs 85 pounds.  Stella is from Europa House of Doberman and is a progeny of the prestigious Di Altobello and Perlanera lines.  Altobello Kennel is known as the number one Dobermann kennel in Europe. Altobello Kennel was Awarded Best Breeder Award in 2005,  Runner-Up in 2006, and number one in 2007 at The International Dobermann Convention.  We selected Stella from her litter due to her demeanor and affect rather than size alone.  Her litter mates were much larger, but temperament was our family's highest priority.

Stella's sire is 115 pounds and her dam is 95 pounds.  Stella is exceptionally good-natured, happy, and protective.  At the dog park, she is the local celebrity athlete outrunning all of the other dogs and jumping over them if they get in her way. She prefers to play rough with the big dogs, but at home she is a gentle giant having been raised with a 3 pound poodle and a 9 pound min pin.  I get daily compliments on how well behaved and sweet she is.  You would never know that she wasn't raised with children.  She will lie there and allow toddlers and babies to climb all over her, pull on her ears, and put their hands in her mouth.

Commands I know- Sit, come, down, stay (up to 2 hours with distractions), and up

When people meet me they say... "That is the best dog! I never thought I liked Dobermans until I met her! Do you breed?"

Our toddler is pretending to file/Dremel Stella's nails using his toy Black and Decker drill.  Haha.

** I unfortunately do not have pictures available of Byron (and boy have I tried!), however,
I have included a link to both of Byron's parents: 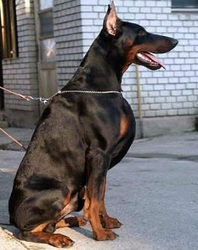 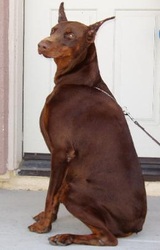 Unfortunately, I do not have pictures available of Biatriccia (I've tried!), however, I have included the link to the Perlanera
kennel and Europa House of Doberman kennel below where we got Stella (they do not have Stella's sire and dam anymore).